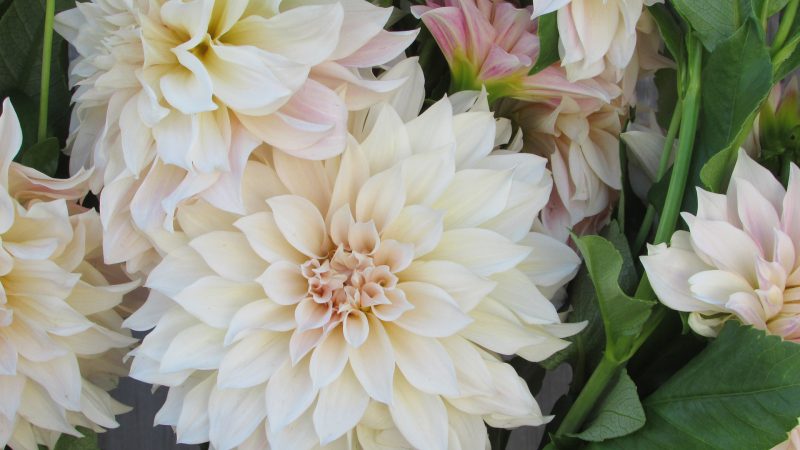 Integrated pest management, or IPM, as I understand it is simply the realization that if you are only using pesticides to control pest then you will not be as successful as you can be. Instead, those who use IPM rely on cultural methods in addition to chemical ones and this leads to less chemical use overall. At Cramer’s we take a lot of cultural practices into consideration when dealing with pests. The following is a non-exhaustive list of cultural practices that we use.

But today I want to focus on Dahlias. Dahlias, particularly dahlias grown in a high tunnel, are a spider mite favorite. In the past we really struggled to find an effective chemical control for the mite problem. And I think I know at least part of the reason why. Look at the picture below. This is what Naomi dahlias in a high tunnel look like. How do you penetrate that canopy with insecticides?

Several years ago, broad mites distorted the leaves of our blackberry plants and stunted shoot growth. In fact, the broad mites were a result of excessive spraying to combat the newly invasive species spotted winged drosophila. All that spraying killed the mites’ predators but not the mites and they flourished. So we purchased predatory mites. Predatory mites are the good mites that eat the bad mites that eat our plants. And they worked.

Anyway, it was only natural for me to use some of those predators on the dahlias. And when we discontinued the blackberry experiment, I continued to buy the predatory mites. I now release 3 times over the season and use 2 predatory mite species. The beauty of using predatory mites is that they easily penetrate the dense dahlia canopy. Besides that, once the predatory mites establish themselves they reproduce and stay with the crop which prevents flare ups of spider mite populations.

A common concern about using predatory mites is that they are easily killed by broad-spectrum insecticides. While this is partially true, I have found that occasional spraying for Japanese beetles or whatever is ok. Probably this is partly because these sprays only need to be focused on the top of the plant canopy, because that is where the flowers and pests are, while the interior of the plant serves as a. reservoir for the predatory mites. Also, we switch from our systemic insecticide with remains toxic for a long period of time to an insecticide which is toxic for only a short amount of time. This still kills the bad bugs on contact but spares the beneficial insects that might transverse that same area a little later.

Because I was already buying predatory mites and paying for shipping I decided to buy some minute pirate bugs as well. Minute pirate bugs (MPBs) are, you guessed it, predators of thrips. However, I think MPBs are more vulnerable to insecticides then the predatory mites. The solution is ornamental peppers; another Cramers’ crop. Every year I place the ornamental peppers centrally among the dahlias. Peppers are a good host plant for the MPBs because they provide pollen which is an alternative food source for MPBs and because we do not spray the peppers with broad-spectrum insecticides. Therefore, if we spray the dahlias and kill most of the MPBs, there is still a reservoir of MPBs in the nearby peppers. MPBs are comparatively mobile and can migrate back into the dahlias. Also, peppers in high tunnels always seem to attract thrips.

Both the predatory mites and the minute pirate bugs have been very effective. This means you are receiving a more consistently high-quality product than if we were relying on chemicals alone. And the product will have less chemical residue. 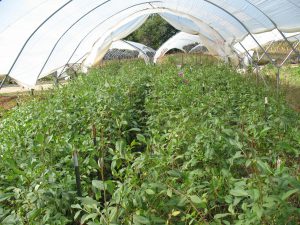